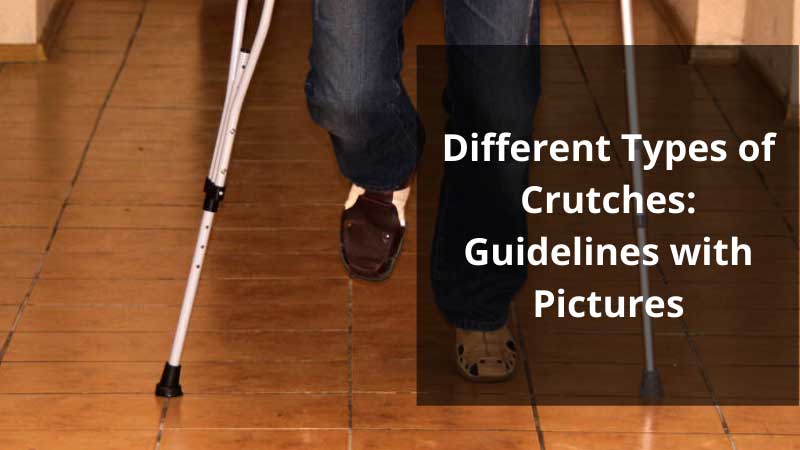 In today’s world, we are faced with choices for everything. You are very less likely to find anything in the market that does not provide you with a ton of selections.

Crutches are the same. You will find multiple types of crutches that cater to the needs of people who have different preferences.

On top of that, you might not be sure about which type of crutch would be right for you. And that is exactly why you’re here, to give you a proper insight so that this decision making becomes easier and much smoother.

Since you’re here, let's move on to the main topic and get you informed about various crutches.

Why Crutches are Necessary

Most of us here already know what crutches are used for, but for those who are unaware of its use, you should know that it consists of a pair of sticks that are there to support and assist you when you get a leg injury.

The idea behind crutches is that it will create a balance as you will not be able to use both of your legs. When one of it is injured, the sticks will be there to make sure you can walk and do not topple over.

Essentially, there are four different types of crutches you can choose from. There are obviously different brands and companies that produce a variety of crutches. But there are mainly four.

They are also commonly called underarm crutches. These are what we usually think of and imagine when the word crutches come up. Mostly, they have a standard design and model that is good enough for your day-to-day movement. And the best part is that it does not cost a lot of money. 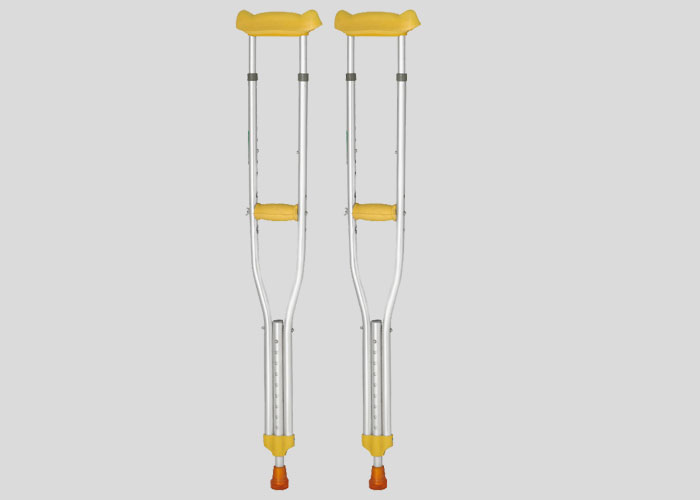 These sticks are usually placed right underneath your armpits, and you are to lean on them so that you are able to get some support. You lean on it as otherwise, you would have had to put all your weight on your good leg, which, after a while, would become very painful.

Also, you will see that these crutches are very useful and worth the money. However, people nowadays try to avoid it if they are able to afford something better. The reason behind this development is the pain or soreness you feel in your underarms every day after walking with these sticks for a long time.

Even though most of them come with some sort of padding in order to avoid painful situations as such, many even opt for using towels underneath to make the whole ordeal less painful.

But if you take everything into account, you might actually end up thinking that this is the right choice for you, especially if you do not plan to use them for a very long time. There is no point spending hundreds of dollars buying something you will only use for a few days and then set aside.

If you happen to be from Europe, then this is the type of crutches you will see most often. They are commonly called elbow crutches, or Canadian crutches, as they were initially made in Canada.

This type of crutch is more for long-term use rather than short-term use, like the underarm crutches. The user of this particular type of crutches will have to place their elbows in place, and that is the area they are going to be leaning on while they walk. 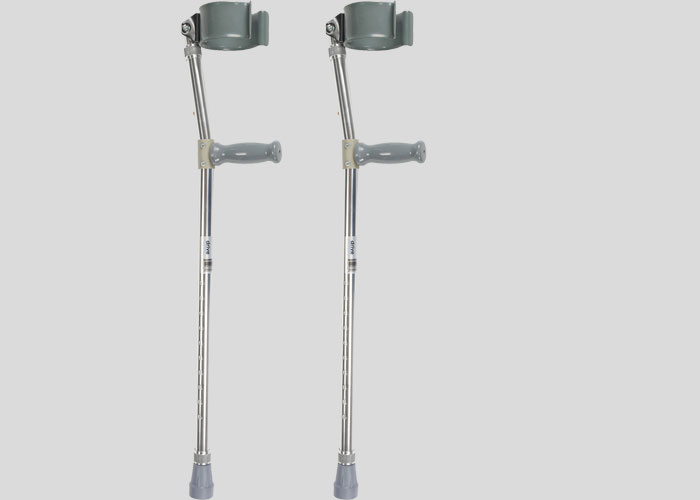 There is usually a semi-circular or a circular slot on top of the crutches. That is where you will have to insert your hands. These slots are either made of plastic or metal, depending on what type of movements you want from your crutches. If you want more flexibility, then you should opt for the plastic ones.

Now, the reason why they are better for long term use is that you will have less soreness on your elbows as opposed to your armpits. As people do not want to suffer from pain like this every day for a long time, they opt for this over the previous one.

The main problem of this one is that you will have to put a lot of pressure on your wrists. So, chances are, they will hurt and be sore.

For the most part, we are done with normal and regular crutches. Now we are moving into the more advanced or specific type of crutches. The gutter crutches are much like the forearm one. However, it has been modified and made better so that the flaws of the previous one do not reflect in this as well. 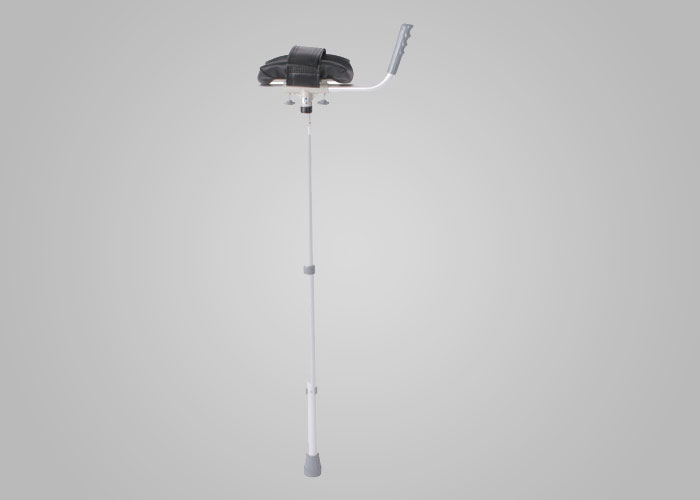 This, too, will have slots made of plastic or metal where you have to place your elbow. But, this is a bit different as there is a rest made for your whole forearm and not just for your elbows. This is a more convenient option than the other as you will not only be putting pressure on one part of your hand, rather it will be distributed.

Moreover, this feature alone makes the crutches the best option for older people as they will not have to rely only on their elbows to support them. It allows them to have better weight distribution.

Also, you will be getting more flexibility as the upper part is made with a type of material for freer movement for your hands.

The only downside you will face is that the price is a bit higher than the regular ones. And you will be paying more for the good quality of material as well as the convenience; both are worth the extra bucks.

The traditional and most common system of crutches is for the user to support their weight on their arms with the help of the sticks rather than exerting any pressure on their injured leg. This new type of crutches is far from the norm, which is what makes this so fascinating. 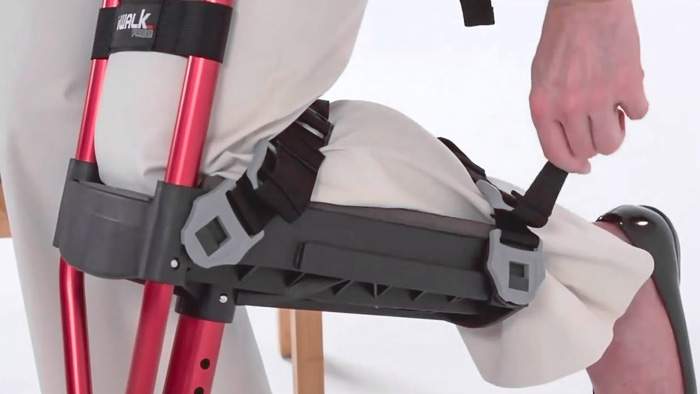 Now, the idea behind this whole thing is that you will not have to use the pair of crutches with the support of your hands, and that is where the hands-free part comes in. You will be using your knees to help yourself move around. This is the most modern and innovative idea that has been brought to the medical sector.

Rather than being given two sticks or one as a support, you will have the support attached to your injured leg. You will have to bend your leg so that the crutches work as a replacement for the leg.

It is a very good idea as with the other kind of crutches you would have to put constant stress and pressure on your hands, underarms as well as forearms. Your knees will be doing all the work, which is stronger than our upper bodies, so the weight will be balanced properly.

And, the only downside to this might be the hike in price for this one in comparison to the others.

As you can see, there are both pros and cons for all these different types of crutches, but in order to pick out the right one, you have to figure out what is it that you want from your one.

Top 10 Best Crutches – Reviews and Expert Buying Guide 2020
Different Types of Crutches: Guidelines with Pictures
DIY Crutch Pads – How to Make Them at Low Cost?
Do You Need Crutches with a Walking Boot?
Flying with Crutches: Here’s What You Need to Know